144,000 Israelites that believe and obey: First-fruits

"After this I saw four angels standing at the four corners of the earth, holding back the four winds of the earth to prevent any wind from blowing on the land or on the sea or on any tree.  Then I saw another angel coming up from the east, having the seal of the living (Alahim).  He called out in a loud voice to the four angels who had been given power to harm the land and the sea:  'Do not harm the land or the sea or the trees until we put a seal on the foreheads of the servants of our (Alahim).'   Then I heard the number of those who were sealed:  144,000 from all the tribes of Israel.

These would be the "saints" (qodeshim) who are "first-fruits", who have TWO characteristics:

1.  They obey the Commandments of Alahim, and

2.  They hold to the Testimony of Yahusha (they believe).

If a person is led to not believe in Christianity's lawless Jesus, but they OBEY the Covenant, they are Israel (Yisharal, to rule with Alahim).  These share in the promises through the Covenant, and may be counted among those described at Zech. 12:10-14.

If a person is led to BELIEVE in Christianity's lawless Jesus, but they DON'T OBEY the Covenant, they are NOT Israel, nor are they the first-fruits or 144,000.

The worst part?  They have no covenant of any kind, but only an imagined one.

People wonder about the beliefs of others, and they always try to find a slot to categorize them. By categorizing people into denominations or belief systems, it's easier to dismiss whatever it is they teach.  On a deserted island, a stranded man that finds a copy of Yahuah's Word would not be influenced by traditions, statements of belief, or any sort of organized patterns set up by men.  Reading Yahuah's Word, he would not find Christianity because the word is not in the text.

There are no Pentecostals, Baptists, Karaites, Catholics, Lutherans, or popes, nuns, sacraments, masses, or Sun-day observances.
To get to the Truth, we all have to meet our Maker personally, in a quiet and lonely place, free of everyone else, as if we were stranded on a deserted island.
The Karaites are unbelievers in Yahusha, so they could not be "first-fruits," the barley harvest described at Revelation 14.  We do TWO things:

"obey the Commandments of Alahim AND hold to the Testimony of Yahusha".

The Karaites would be about the closest to our walk, so it is very perceptive if people ask if we are Karaite;  they perceive that the Covenant is strong with us.

But, we are not "Christian" (a Greek term), but rather we are Israelites of the sect of the Natsarim (Acts 24:5).
We are Israelite, because we are in the Covenant (Eph. 2), and Natsarim because we hold to the Testimony of Yahusha.
Being these, we are of the "barley harvest", the "first-fruits", and of the 144,000 being gathered from the 12 tribes of Israel in the last days.
Only 12,000 of these are from the tribe of Yahudah (Jews), and the others are likewise being called out from among the nations where they were dispersed long ago (2700+ years).
Read Psalm 80, and you will see that we are something completely new that Yahuah is doing, that He planned long ago.

WHO IS LEW WHITE?
www.fossilizedcustoms.com/Lew_White.html

See more about them at:

THE CHALLENGE FOR THE CREATION MUSEUM’S NEXT LEVEL

WHAT ABOUT THAT DOME -    KIPA or YARMULKE  Strawberry Islands Messianic Publishing, Louisville KY

IF YOU ARE CONSIDERING BEING IMMERSED INTO YAHUSHUA'S NAME, SEE THIS LINK: 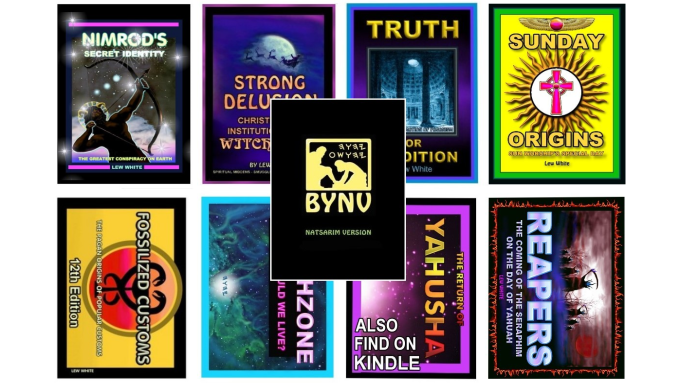 Torah Institute is not a 501c3 organization