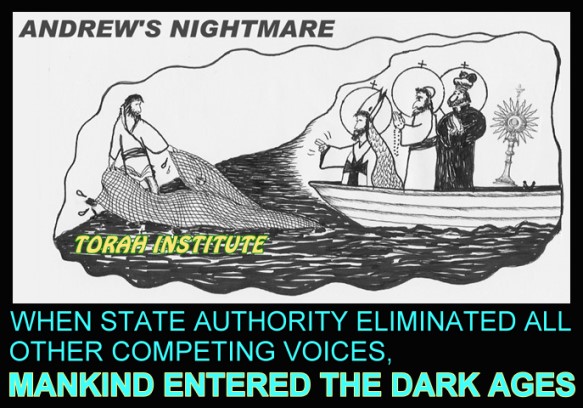 One night, Kefa's (Peter's) brother Andrew had a dream.  In his dream, He was fishing by the side of the lake, and his brother Kefa, and friends YaAqob (James) , and Yahukanon (John), drifted up in a little boat.

“Shalom Kefa! It’s been quite a night,”  Andrew called to them.

“What’s with the bubbles and all the gear? It’s not Purim already is it?”   he asked.

Kepha replied in a scornful tone of voice, “That’s Reverend Kefa to you, brother Andrew. I’ll not have you addressing me in such a profane manner.”

Ya’aqob, Yahusha’s brother, piped in, “And I’ll be Rabbi* YaAqob from now on, and this is Pastor Yahukanon; dig?  Otherwise, you can call us ‘Father’ if you wish.”

Andrew was stunned at the change in these formerly humble men. It made him feel very low, unimportant, and unloved. He said in a faint, hesitant voice, “Where have you been for the last several months, I’ve missed you all.”

Kefa said, “We’ve been studying in Rome, and now we have the whole rank-and-file worked out. We’ve adopted the patterns of the Kaisar’s religious council, due to its efficiency and absolute control. We’re pig-eating Sun-day worshippers now, calling ourselves ‘Christians’.  Help us with this monstrance!”

“Yahusha in us” works through our vessels to speak to the lost. We are not working among ourselves in isolation. If we consider certain people are unworthy in our eyes to be around, then we find ourselves excluding most, and surrounded by only those who adhere to what we agree with. There would be divisions everywhere; some would be called 7th Day Adventists, others Jehovah's Witnesses, or Universalists, Catholics, Presbyterians, Baptists, Amish, Society of Friends, and so on. In the parable of the Pharisee and the publican (Luke 18), which one of these two men went to their house upright before Yahuah? When we place ourselves above others, we are self-exalted in our hearts, and very unlike Yahusha. One of the reasons people misunderstand Paul concerns his teaching of the nations. He became like them in order that some of them might be delivered. I've worked among the lost and received harsh criticism for being there, but those who were helped are more than thankful I was there to reach them. If someone is not sent, how will they hear? Astrologers, witches, murderers, thieves, fornicators, and atheists once surrounded me on a daily basis. The Truth presented in love goes forth to change hearts, and is an irresistible force. The rejection some experience is often caused by the presentation style, not the message. When we share with the lost, we don’t caste judgment on them, but express sincerity and love in our words.

"Therefore we are envoys on behalf of Messiah, as though Alahim were pleading through us. We beg, on behalf of Messiah: Be restored to favor with Alahim." 2Co 5:20 The logical conclusion of factions and divisiveness became a reality when backed by the power of the state under Constantine. The dark ages began with the Nicene Council in 325 CE. I drew the illustration above many years ago that upset many people, but I still hold it to be an accurate description of how far we've fallen.

HEBREW ROOTS TRANSLATION BY NATSARIM FOR THE NEXT GENERATION: 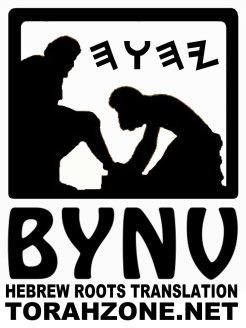 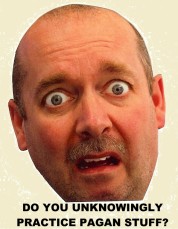