HOMOSEXUALITY   -   arsenokoites:  what it really means 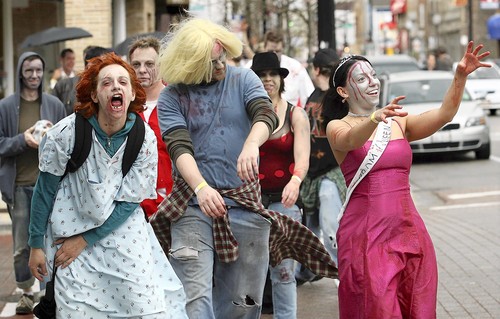 Yahusha was asked about marriage. He didn't indicate that any power joined two in marriage, other than Yahuah.

A city clerk, pope, pastor, or any other official doesn't join them, and if they do, they are usurping Yahuah's authority.

Notice Yahusha used the terms "male" and "female," and the number two:

So that they are no longer two, but one flesh. Therefore, what Alahim has joined together, let man not separate.'"  Mt. 19:4-6

The "two" shall become "one flesh." These "two" are male and female.

What does the Torah have to say about homosexuality?

"If a man lies with a man as one lies with a woman, both of them have done what is detestable.  They must be put to death; their blood will be on their own heads."  Leviticus/Uyiqra 20:13   Mm-Hmmm. . . death, eh?

The Christian translators opted to interpret a Greek word, ARSENOKOITES, and used the word "effeminate" or the phrase "homosexual offenders." But when you see the literal meaning of the Greek, it will leave no doubt in your mind.

The KJV  1 Cor 6:9-10   "Know ye not that the unrighteous (Torah-shunners) shall not inherit the kingdom of (*Alahim)?    Be not deceived: neither fornicators, nor idolaters, nor adulterers, nor effeminate, nor abusers of themselves with mankind, nor thieves, nor covetous, nor drunkards, nor revilers, nor extortioners, shall inherit the kingdom of (*Alahim)?"   1 Cor 6:9-10

The NIV:   "Do you not know that the wicked will not inherit the kingdom of (*Alahim)?   Do not be deceived: Neither the sexually immoral nor idolaters nor adulterers nor male prostitutes nor homosexual offenders (these two words are where the Greek word "ARSENOKOITES" occurs) nor thieves nor the greedy nor drunkards nor slanderers nor swindlers will inherit the kingdom of (*Alahim)."

Some may remember what happened to the city of Sodom, and why it happened.

Translators soften this literal meaning by using "effeminate" or "homosexual offenders" to convey the idea.

The first part of the word, ARSEN, means MALE - thus putting the two parts (ARSEN + KOITE) together, we see it is correctly defined as SODOMITES, the "S" ending in ARSENOKOITES makes the term masculine.

A gay pastor may fail to comprehend the meaning of the "sin of Sodom" which was destroyed as an example to us who would live in that way, and he would also be ignoring the clear warning given at 1 Cor. 6:9-11.

The translators did not bring the literal meaning across using either "sexual offender" or "effeminate."

It is much more clear when you look up the Greek word itself, and put it into the context of the sentence.

They will NOT inherit the world-to-come, but be cast alive into the Yam Aish, the LAKE OF FIRE.

Men with men, or women with animals are both situations where it should be clear to everyone that something is wrong, and not normal.   Many women have abandoned their "natural function" also, and turned away from child-bearing.  Many who have put their professional lives ahead of making families fall into this thinking.  Homosexuals, to make themselves feel normal, attempt to adopt children, and usurp the concept of marriage, calling on the legal systems to declare their union a marriage.

No homo-fear or hate speech is involved here;  only authentic, historical facts are presented.  If anyone doesn't like the facts and wishes to ignore them, that's their privilege, and they can accept full responsibility for their actions.  Don't blame the messenger, even though in this case it may be one of those BREEDERS.

Non-breeders desire to be accepted equally, without feeling different or accepting the consequences of their behavior.

They need to ask themselves, "where did I come from?"   The answer is, of course, breeders!

Now for the "rod and staff" lesson to help this sink-in for all homos and heteros:

I'm an "assistant" pastor, since Yahusha is the only Pastor.  He is the only "Rabbi" (my Teacher). The best we could ever be is an assistant, but not a rabbi. That job would naturally make people ask: "Who is the Rabbi?"  It would be a job, not a rank or position "over" another  -  that's important to remember.  Our knowledge only makes us more responsible, not "in charge".  We're all on level ground before Yahusha.  He can lift us higher, but we can't put ourselves there. "Pastor" is a Latin word meaning SHEPHERD, a word that refers to a "sheep-herder."  People are like sheep, aren't they? The Hebrew word for shepherd is RO, and it is used in Psalm 23:

"Yahuah roi" - and means "Yahuah is my Shepherd." Our Shepherd, RO, has His ROD and His STAFF.  One of these is to correct us, and the other is to protect us.  Isn't that comforting to know?  As we study and learn, we receive the ROD as correction for our behavior. Prov 10:17:
"He who heeds discipline shows the way to life,
but whoever ignores correction leads others astray."

"Pharaoh" (or Faroh) means lead shepherd in the Hebrew language.  In the Egyptian, Faroh can mean "great house." His main title was good shepherd (that sounds familiar).  Satan (ha shatan) consistently seeks to usurp Yahusha's position;  when this title is taken by any man, they place themselves along-side, or replace, the true Good Shepherd.  If a man calls himself pastor it is clear he wants to be put above the sheep, and usurp Yahusha's position over them. If a man allows others to call him their "pastor", he needs to repent immediately from this and humble himself. We are to feed Yahusha's sheep, not receive honor from them.

2 Peter 2:1-11   "But there also came to be false prophets among the people, as also among  you there shall be false teachers, who shall secretly bring in destructive heresies, and deny the Master who bought them, bringing swift destruction on themselves.  And many shall follow their destructive ways, because of whom the way of truth shall be evil spoken of, and  in greed, with fabricated words, they shall use you for gain.   From of old their  judgment does not linger, and their destruction does not slumber.  For if Alahim did not spare the messengers who sinned, but sent them to Tartaros, and  delivered them into chains of darkness, to be kept for judgment, and did not spare the world of old, but preserved Noah, a proclaimer of righteousness, and seven others, bringing in the flood on the world of the wicked, and having reduced to ashes the cities of Sedom and Amorah condemned them to destruction – having made them an example to those who afterward would live wickedly, and rescued righteous Lot, who was oppressed with the indecent behaviour of the lawless (for day after day that righteous man, dwelling among  them, tortured his righteous being by seeing and hearing their lawless works), then Yahweh knows how to rescue the reverent ones from trial and to keep the unrighteous unto the day of judgment, to be punished, and most of all those walking after the flesh in filthy lust and despising authority– bold, headstrong, speaking evil of esteemed ones, whereas messengers who are greater in strength and power do not bring a slanderous accusation against them before the Master."

Women with women  -  how about that?

Like you, I've wondered about this and found NOTHING specific in Leviticus/Uyiqra about it  -  but keep reading!
What is proper to consider in this case is the intention of Yahusha when He created man and woman, and their natural function.

Having His mind within us, we can discern His perfect plan;  but we can also distort it with our own whims.

There are still two possibilities:

When He inspired the text in the Hebrew, the word for "animal" is #929, BEHEMAH, and applies to any cattle, beast, or living entity.  If we understand the general point of this, then it would include living creatures of any kind that are not

appropriate, even alien beings from other worlds (if they were to actually exist).

The "NEFESH CHAYIM" is the "breath of life", however the word "NEFESH" also means BEING or ENTITY, a living thing.  The improper use of the sexual act, or any sexual activity which might defile us is wrong, such as joining ourselves to a prostitute.  There are many discussions in Scripture warning us of prostitution, and it is clearly wrong, yet it mostly applies to a man with a woman.

Any "living being" that we mate with is carefully considered at Lev. 18 and Lev. 20, as we see here:

A "perversion" would be any activity not intended by our Creator.
If women all got together by themselves, men would be left without their natural affection.  One of Paul's statements haunts me as he describes the state of things in the extreme end-times:
Rom 1:24-27:
"Therefore Alahim gave them over in the lusts of their hearts to impurity, that their bodies might be dishonored among them.  For they exchanged the truth of Alahim for a lie, and worshiped and served the creature rather than the Creator, who is blessed forever. Amen.
For this reason Alahim gave them over to degrading passions; for their women exchanged the natural function for that which is unnatural,  and in the same way also the men abandoned the natural function of the woman and burned in their desire toward one another, men with men committing indecent acts and receiving in their own persons the due penalty of their error."

WHO IS LEW WHITE?
www.fossilizedcustoms.com/Lew_White.html