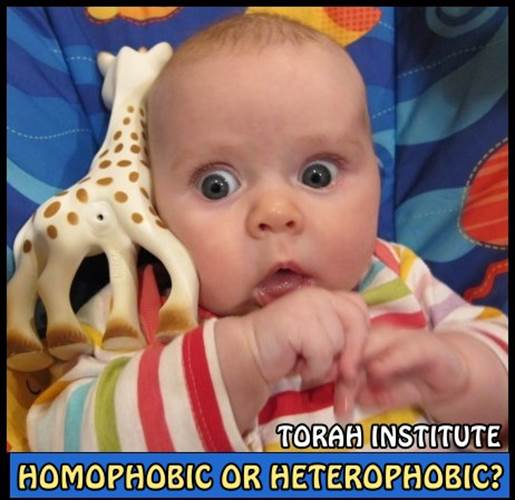 Homophobic Is A Misnomer

When the truth of anything comes out, the world reacts to it through the 3 stages:

2. It is violently opposed

3. It is accepted as being self-evident

The issue of homosexuality is clouded in misinformation, so let's get at the truth.

To be fearful of one's own gender is what "homophobic" means.

The root cause of homosexual behavior is due to being "heterophobic" - a fear of the opposite gender. It is societal conditioning, not a disease or one's "orientation."

The sons of Aharon who became the kohenim (priesthood) were the butchers/chefs for atonement operations, and they served as the medical staff for the nation. Imagine, for a moment, after one of these priests helped a man determine if a boil on his skin was unclean, another person comes up with his problem.

The man sits down and tells the priest,

"I think I have some kind of disease."

"What seems to be the trouble?" asks the priest.

The priest pauses and thinks for a moment, then says,

"Yes, you may have a disease of some kind. Perhaps it would be best, for now, if you avoided being around any young boys."

Yahuah is the same yesterday, today, and forever, and He does not change.

Perversion, or an abomination, is not a disease, it's a decision to rebel.

Improper use of Yahuah's creation will bring judgment.

Sodom is all around us, and the reapers are coming soon.

This is like putting a fox in charge of a hen house.

"And a man who lies with a male as he lies with a woman: both of them have done an abomination, they shall certainly be put to death, their blood is upon them." - Lev / Uyiqra 20:13

The above Scripture, and others pertaining to this subject, will be the reason the Scriptures will come under attack. Our enemy is not flesh and blood.

Yahuah does not recognize two men or two women to be a marriage, because it is He who said: (note the terms "male" and "female" in this text):

"And He answering, said to them, “Did you not read that He who made them at the beginning made them male and female, and said,

‘For this cause a man shall leave his father and mother and cleave to his wife, and the two shall become one flesh’?

So that they are no longer two, but one flesh. Therefore, what Alahim has joined together, let man not separate.”  - Mt. 19:4-6

We know who it is that hates marriage: the dragon.

The one who tells the truth comes under attack, and the wrong are cheered and paraded in the streets. When the Sun goes dark, and the moon turns blood-red, the wrong will then have something to fear. They will be "Yahushaphobic" - and the winepress of the wrath of Yahuah will be filled on the Day of Yahuah.