"This is written for a generation to come, So that a people to be created praise Yah."
(BYNV)

Yahuah wrote His Name in His Writings of Truth far more than any other single word.

Teachers are insisting there are no written vowels in the Hebrew texts, so the Masoretes had to invent vowel marks in the 8th century. The evidence is overwhelming that we are being lied to.

When teachers call the script of Babel (which are Aramith letters) "Hebrew," they are often the same people explaining how there are rules to follow in order to correctly pronounce the Hebrew language. A script is the method used to write in, and a language may be written in many different kinds of scripts.

If we write in a script few people can read, then we can make the majority believe whatever we tell them it says. The Internet is filled with all kinds of teachings, and people to teach them. Most of them are passing on traditions they learned, and the errors have become repeated so often, they are embraced as the Truth. Some know the Truth, but keep making excuses.

What we have here is a classic example of misdirection, and equivocation.

Casuistry (casuistry - the use of clever but unsound reasoning) is often used by teachers who claim the four lettered Name is made up of consonants.

They will defend their position by declaring that those who promote a wide array of different pronunciations than they use don’t know anything about Hebrew. The fact is, the Name of Yahuah is four VOWELS.

It's obvious they are vowels, because they have no hard attack or glottal stop when the letters are pronounced in the Name. Since we don't have any recordings of how Hebrew words sounded, we can review the written record of someone that lived while the Temple (Hekel) was standing, and definitely DID know Hebrew. His real name is Yusef Ben MatithYahu, but the scholarly world has been teaching us his name is "Josephus."

Josephus (Flavius Yusef) in his War of the Yahudim book 5, chapter 5 v.7 states:

“A mitre also of fine linen encompassed his head, which was tied by a blue ribbon, about which there was another golden crown, in which was engraven the sacred name - it consists of four vowels.” 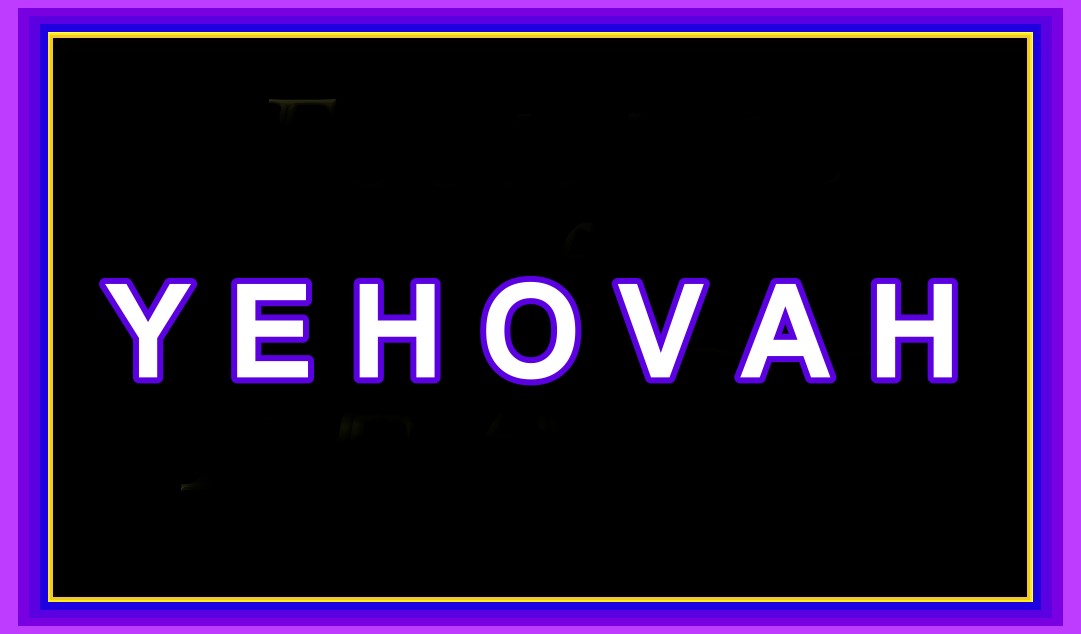 Is the Name YEHOVAH, or YAHUAH?

Our lips are being refined to call on the Name Yahusha for deliverance, but not by foreign tongues, the grammer rules of men, or speech directions invented by Karaites 700 years after Yahusha walked the Earth. The Greek and Latin alphabets fail us, but the real Eberith letters (without the niqqud marks men invented) are being resisted. When traditions are challenged by Truth, this is to be expected. The 22 letters (from Alef to Tau) provide all the consonants and vowels we will ever need.

A Karaite sect, the Masoretes (traditionalists), corrupted the phonology of Eberith over the 8th-12th centuries. We are really close to the return of Yahusha. Yahusha's last Natsarim are saying "baruk haba bashem Yahuah" - reminding us that Yahusha said we would not see Him again until we said that very phrase. 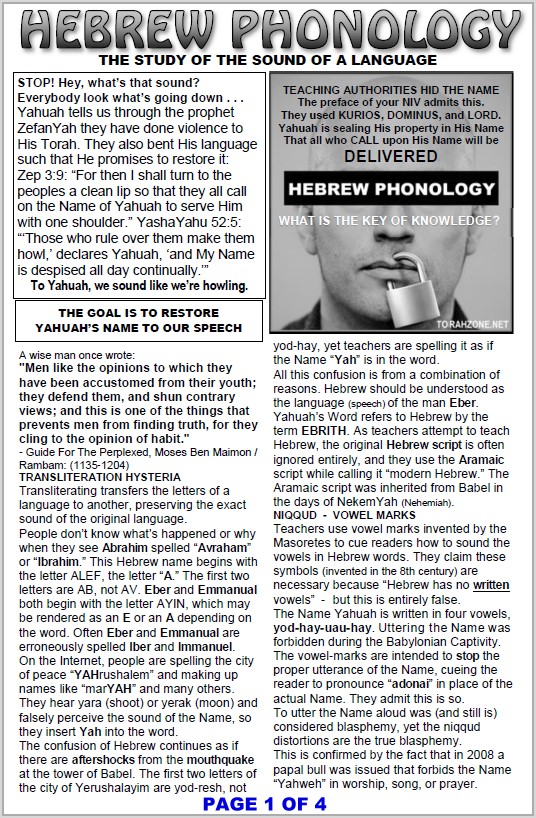 The narrator in one Hebrew teaching presentation goes on a “rules” explanation of consonants and vowels, and seems to not be aware of the fact the Name has no consonants. “Closed syllables” (CvC) and “open syllables” (Cv) is used as the vehicle to explain the pronunciation of the Name, and yet no pronunciation is ever offered. Instead, a substitution translation is emphasized, eliminating the whole approach to the Name with ideas like character. The word character in Latin is persona, and means MASK. I’m not trying to use cleverness to deceive, I’m telling it straight, just as it is. If we do not call on the Name of our Creator, but instead mask His Name for the sake of unity, we cannot truly know the identity of the one we are “calling” on. This presentation leads nowhere, except to show contempt for those who pursue the pronunciation of the Name, which Natsarim are guardians of. He accuses us of spreading chaos.

When Yahuah states the following, He is not referring to His “character”, but His Name:

Exo 9:16 “And for this reason I have raised you up, in order to show you My power, and in order to declare My Name in all the earth.”

The pharaoh did not know Yahuah, and would have laughed if Mosheh had referred to Him as this narrator has.

What if AliYahu (Elijah) had called upon some substituted Name at Mount Carmel?

Some teachers also promote the letter shapes sometimes called proto-Sinaitic script of the Hyksos, a primitive adaptation of Egyptian hieroglyphics. This script was never developed beyond a handful of letters based on hieroglyphs, the bulk of which discovered on cave walls believed to be turquoise mines in the Sinai peninsula.

They were near the ancient ruins of an Egyptian temple dedicated to the goddess Hathor, the mistress of turquoise. You can research this script and the site called Serabit ha’Khadem.

No one has ever discovered Yod-Hay-Uau-Hay written in such letters, yet many Natsarim are promoting it all over the place on hats, shirts, and web designs. The Hyksos were Canaanites, and imitated what they saw on Egyptian temple writings. This is all there is to the origin of such letter shapes. Yahuah didn’t write in the script of the Egyptians, or the Hyksos.

No matter who says it, or how often you may hear it, these are not the "original" forms for the Hebrew letters, or their precursers.  They are Egyptian in origin, and crudely copied by Canaanites, the Hyksos: 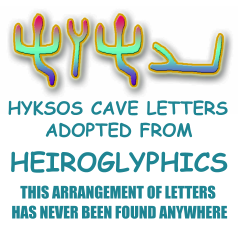 This is the palaeo-Hebrew script, mistakenly referred to as "Phoenician" by modern scholars.  The first to use the term "Phoenician" was the 5th-century BCE historian known as Herodotus.  Being Greek, he made up a word based on his own Greek language to describe the sea people that lived in the land occupied by Yisharal, the Tyrians, and Sidonians.  He lumped them all together into the term "Phoenicia" which means date palm in Greek.

Here's the authentic Eberith script used by the ancient Hebrews: 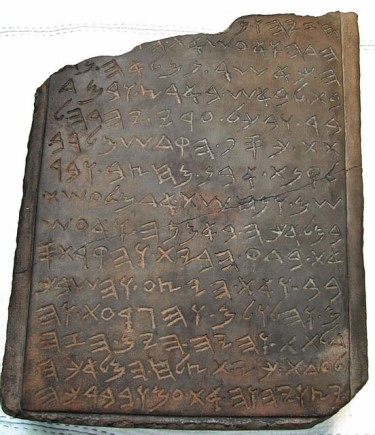 The Name is on the bottom line in the photo above.

Here is a letter chart to compare ancient Hebrew to others: 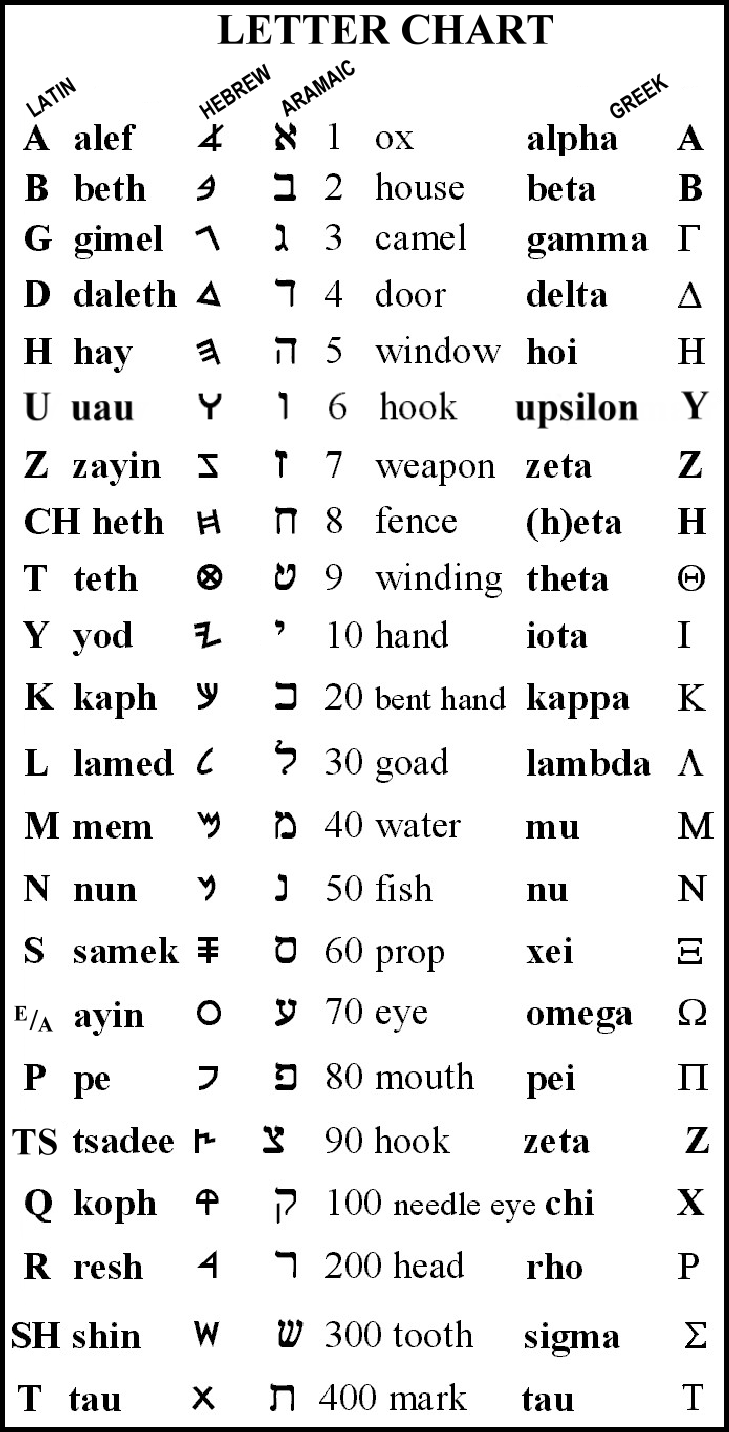 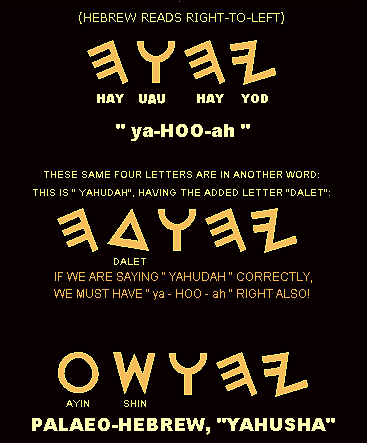 Therefore My people shall know My Name, in that day, for I am the One who is speaking. See, it is I.”

The Letters of the Name Are Vowels
YUSEF BEN MATITHYAHU, 1ST CENTURY HISTORIAN, SAYS THEY ARE.

The historian scholars have called "Josephus" described seeing the

four vowels written in Hebrew letters on the headpiece of the kohen ha gadol:

"A mitre also of fine linen encompassed his head, which was tied by a blue ribbon, about which there was another golden crown, in which was engraven the sacred [qodesh] Name [yod-hay-uau -hay]: it consists of four vowels."

The Name is used more than any other word in Scripture,

but the translators removed it. 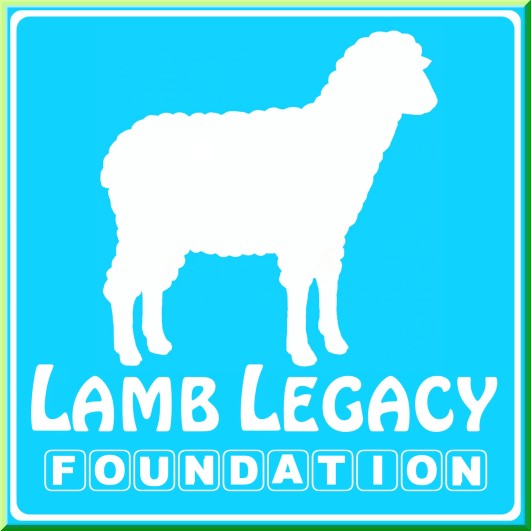 The Name of Yahuah is the Key of knowledge withheld by the builders. 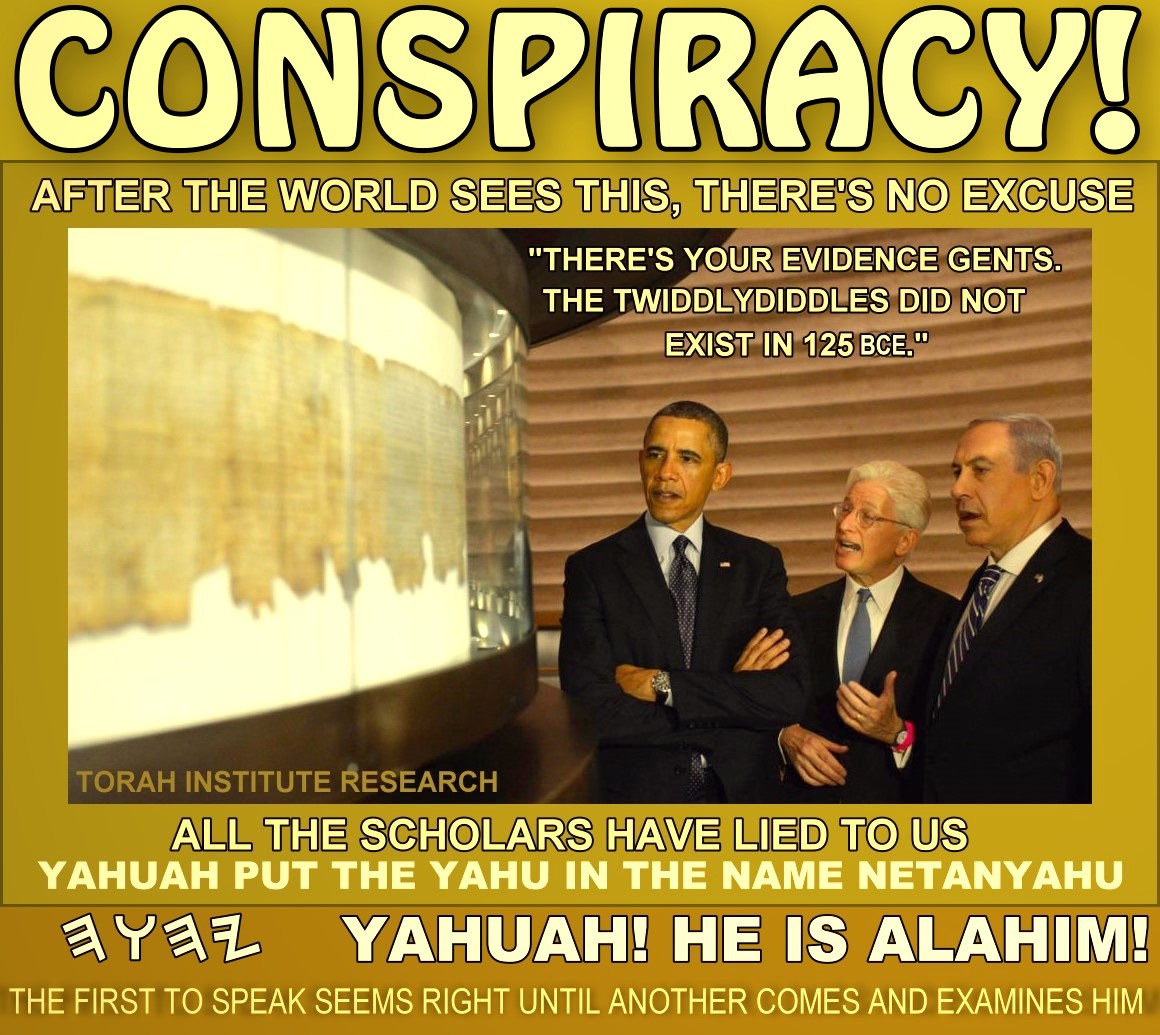