The greatest conspiracy on Earth is exposed.

Mankind's Most Prevalent Activity Is IDOLATRY 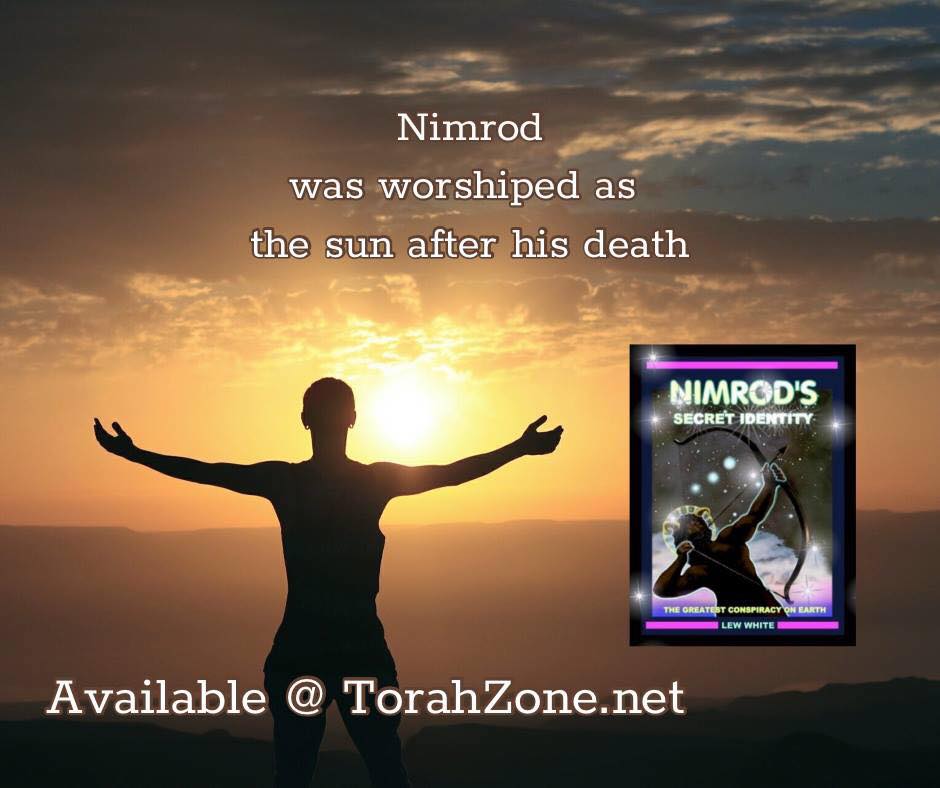 The Nimrod mindset is pervasive throughout all cultures in all times. All the solar deities everywhere represented the original Nimrod Sun deity  in a babbled name. They were all thought to be "reborn" on December 25th. Baal, Ra, Shammash, Krishna, Zeus, Molok, Odin, Apollo, and the Gilgamesh mythology are based on Nimrod. Reincarnation originates with Nimrod coming back as Tammuz through his wife/mother, Semiramis.

Some of these Sun deities were cast as being female, but still these were modeled after the tyrant Nimrod. 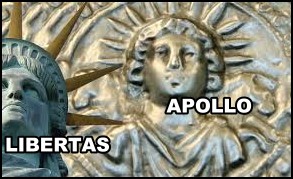 The media will eventually realize Santa is the modern world's Nimrod character. Mankind’s most cherished religious practices are modeled after a legendary fantasy based on fertility, leaving out the knowledge of the true Creator and His redemption plan for us. 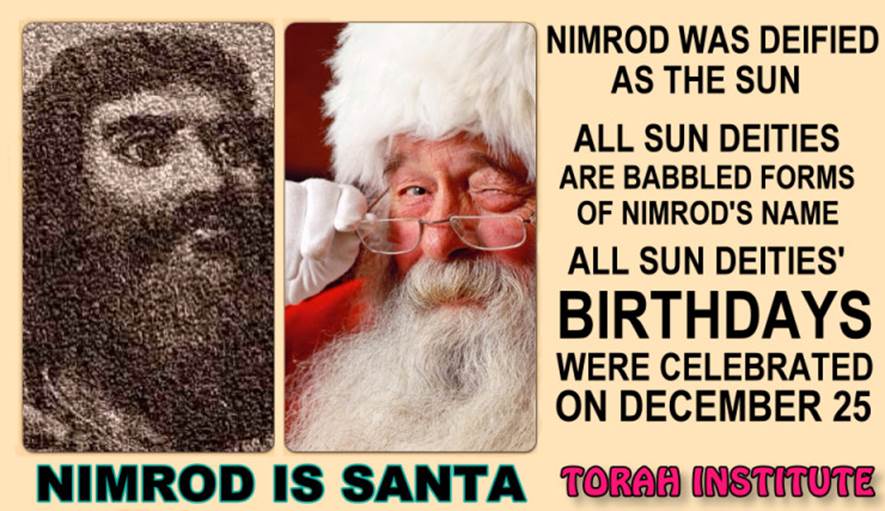 or order the printed book

FROM ANYWHERE IN THE WORLD

Whatever faith you may have, this information will show you the World Order as it really is, and how far back in time the rabbit-hole goes.

A synopsis of the book Nimrod’s Secret Identity

The first man to be worshipped as a “mighty-one” (GOD) was Nimrod. The World Order is a scheme to make everyone compliant to a Nimrod Matrix, or mode of conduct. If we are worshipping Yahuah, we are obeying His Commandments.

If we are worshipping the Nimrod Matrix, we are working much harder: running into a steeple every week to pay someone to tell us we don’t have to obey, baking birthday cakes, lighting candles and making wishes, boasting blessings with lifted beverages, carving pumpkins and dressing up for the witchfest, erecting trees in our homes pretending it’s not about the Sun’s birth, coloring eggs and eating chocolate rabbits, decorating the outside of our home with lights, pretending that an authority figure has power “vested in them” to pronounce us married (when it was Yahuah alone Who joined us together in marriage), and so on.

If you look through your family photos, they tend to involve occasions the Nimrod Matrix has obliged us to swarm.

Stop swarming on the traditional occasions, and the family bonds are wounded severely.
"And He answering, said to them,

“Well did Yashayahu prophesy concerning you hypocrites, as it has been written, ‘This people respect Me with their lips, but their heart is far from Me.
And in vain do they worship Me, teaching as teachings the commands of men.’ Forsaking the Command of Alahim, you hold fast the tradition of men.”
And He said to them, “Well do you set aside the command of Alahim, in order to guard your tradition." - Mark 7:6-9
With Yahusha's words in mind, what traditions have come to replace the Commands of Yahuah? Christmas; Easter; Sunday; Halloween (feast of dead saints); sacraments; steeples; bells; crosses; eating unclean animals; apostolic succession; celibacy; veneration of human remains, images; holy water; indulgences; trinitarian ideas; prayer beads; prohibition of true Name, Yahuah, Yahusha; prayers to the dead (necromancy); infant baptism; and much more.
Men have set aside the Commands of Yahuah for their traditions. 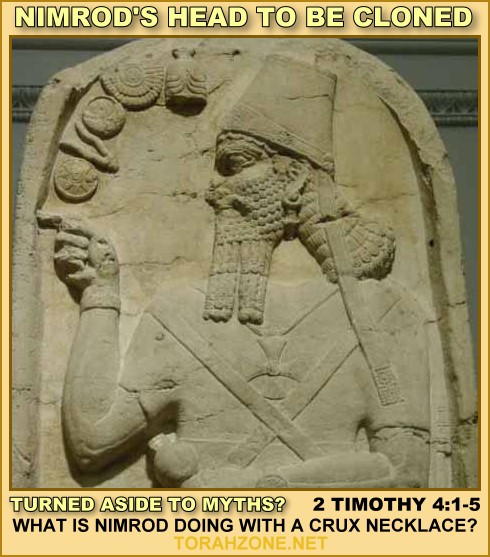 Nimrod's Head Found!
They plan to clone the stinky head and make a body, then place it in a critical location at the CERN particle accelerator at Geneva, Switzerland.
2 TIMOTHY 4:1-5
"In the sight of Yahuah and the Master Yahusha Mashiak, who shall judge the living and the dead at His appearing and His reign, I earnestly charge you:
Proclaim the Word! Be urgent in season, out of season.
Correct, warn, appeal, with all patience and teaching.
For there shall be a time when they shall not bear sound teaching, but according to their own desires, they shall heap up for themselves teachers tickling the ear, and they shall indeed turn their ears away from the Truth, and be turned aside to myths.*
But you be sober in all things, suffer hardships, do the work of an evangelist, accomplish your service completely." (BYNV) 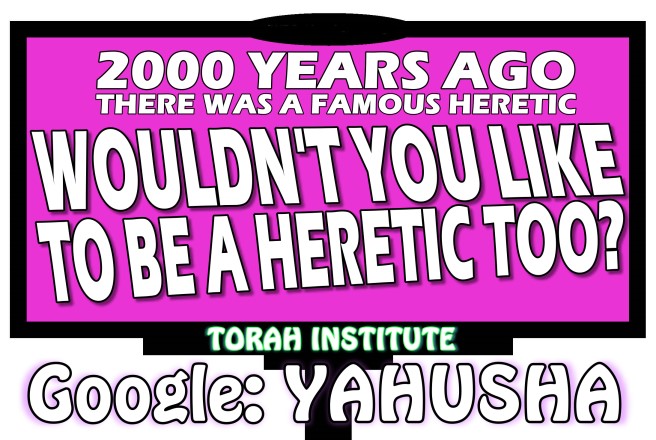 WHAT IS A CHRISTIAN?

The term Christian was used by the Greek culture over 100 years prior to Yahusha’s birth. Rome and Alexandria, Egypt were the western world’s repositories of knowledge.

A merger of ancient Egyptian, Greek, and Roman cultures took place from 300 BCE to 200 CE.

The Greek deity Serapis replaced Osiris as the consort of Isis, and the devotees were called “Christians.”

Hadrian (Roman emperor 117 to 138) built the Pantheon (temple to all gods) using concrete to form the world’s largest domed structure (domes being a pagan temple design). He wrote that Serapis and IESU were the same deity. Confusion and syncretism between cultures at Alexandria continued well into the 4th century CE. The Alexandrian cult, or church fathers, worked feverishly to synthesize paganism with the Messianic movement, hatching their brand under the Serapis’ followers name, Christians.

The followers of Yahusha were called Natsarim (branches, watchmen, guardians – see Acts 24:5). We guard (shamar) the Name and the Word.

To the Greeks, the impaled Mashiak is foolishness (1 Cor. 1:23), so the Greek term “xpristianos” (meaning idiot) seemed appropriate to them. The Greek term CHRISTIANOS in that day was a term foisted on them, causing suffering as Peter writes about it at 1 Peter 4:15-16.

The scorn of being labelled a murderer, thief, doer of evil, or meddler is, in that day, understood as being an idiot or “cretin.”

Here is the context of this rarely-used term, christianos:

“For do not let any of you suffer as a murderer, or thief, or doer of evil, or as a meddler. But if (one suffers) as a xpistianos, let him not be ashamed, but let him esteem Alahim in this matter.” – 1 Peter 4:15-16

It was a term of scorn, xpistianos being the etymological source for our modern word CRETIN.

We should never call one another such a term. Essentially, it means idiot, but revisionism has caused mass-amnesia.

The Name of Yahuah is not found in the popular translations (NIV, KJV, NASB, etc.). brazilian hair 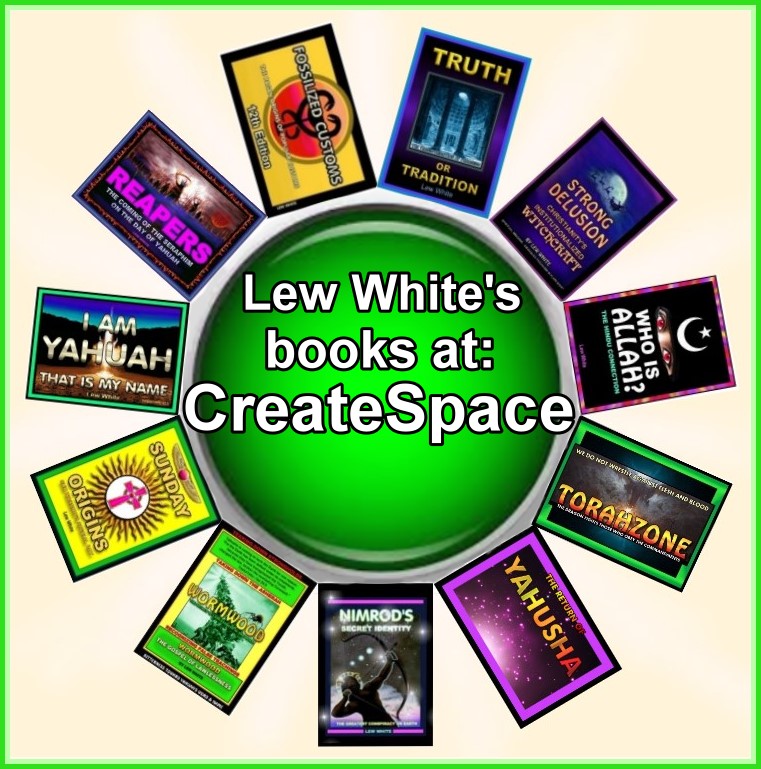