A BRIEF CONVERSATION BETWEEN A JESUIT AND A NATSARI 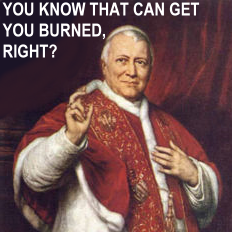 Because my name (Lew White) came up on a Catholic forum, I registered to respond to several questions being asked about “the cult of the Natsarim.”

This is the entire, but brief, interaction I had with the Jesuits. You will find their final response very interesting.

The original post on the forum asked the question:

Has anyone heard of the cult of the Natsarim? What are it's core beliefs and how does it relate to Jewish and Christian religion??

This is my original reply to the question, because my name was mentioned in the forum as being in a “cult,” the Natsarim:

The term NATSARIM is used to describe the ORIGINAL followers of Yahusha of Natsarith at Acts 24:5. The term "Christianos" is found 3 times in the Greek, but the term was, in that time, a Greek term of scorn.

The Hebrew/Yisraelite followers did not call themselves by a Greek term, but were at first called "Christianos" at Antioch, according to Acts 11:26. If you look up the term "cretin" you will find it is traced back to the original Greek, "Christianos" a scornful term used in that time to describe a simpleton, or an idiot. The term later was adopted by those at Alexandria, and propelled by the headmasters of the Catechetical School of Alexandria.
For every weird accusation there is a logical, truthful answer; my reputation has been commonly smeared, but so was the "cult" called Natsarim in the days of the first followers - Acts 28:22:
“And we think it right to hear from you what you think, for indeed, concerning this sect, we know that it is spoken against everywhere.”

But am I to understand you are yet another group of Judaisers?

"Heresy" is the strongest accusation one group will accuse another one of. Strong (and deadly) disputes arise between groups who share similar, but not identical beliefs. Sunni and Shia are similar, but not identical, and so each group considers the other "heretics."
Since the 12th century, the Natsarim (aka Huguenots, Waldensians) kept the Commandments as written (including the true Sabbath, not Sun-day), and were brutally attacked by German, French, and Bohemian armies for centuries, long before the "Reformation."
THE WIKIPEDIA ENCYCLOPEDIA STATES:
"The Roman Catholic Church declared them heretics — stating the group's principal error was 'contempt for ecclesiastical power'.
The Waldensians were also accused by the Catholic Church of teaching ‘innumerable errors'."

JUDAIZER is the label often used today for those who obey Torah, however at Galatians 2:14 it specifically was over adult male circumcision - Paul confronted Peter over this point, and it was finally decided on as recorded at Acts 15, with Yahusha's brother James (YaAqob) presiding over the Natsarim assembly (he was the Nasi, or president of the Natsarim). If we obey the true Sabbath, and teach love, obedience to Torah, we are accused of being "Judaizers," and thus "heretics." The fruit of the tree is the way you determine the kind of tree it is. We Natsarim teach love, which is the outcome of guarding the Commandments. The bad fruit, centuries of extermination, including before the Inquisition existed, must be placed in another divisional camp, which will be judged by Yahusha, not me or any other Natsari.

We are to love, teach, and obey; not judge.
We are labeled heretics because we love the Commandments, and shun the Nicolaitane "ecclesiastical powers." We still love our enemies, and don't kill them. We hold no power, nor pursue it. Yahusha is our Head, we are His body. The fruit identifies the tree it hangs on.

Lew, You did not answer my question. You just lost credibility and earned a report to the forum masters. I believe that you are proseltyizing...You are preaching.

I'm not preaching, I'm addressing the question. Specifically, the question was are we a sect of Judaizers? The context is often misunderstood, since a "Judaizer" referenced from Galatians 2:14 pertains to circumcision, which is the book Paul wrote addressing the topic of circumcision. Catholicism condemns those who rest on the Sabbath as "Judaizers," and they even refer to "the Sabbath" in their decision from the Council of Laodicea in 365 in 59 laws, Canon #29:

"Christians must not Judaize by resting on the Sabbath, but must work on that day, rather honoring the Lord's Day; and if they can, resting then as Christians. But if any shall be found to be Judaizers, let them be anathema from Christ."

One would have to concede that Yahusha and all His followers would be anathema according to this dogma. The law even makes reference to "the Sabbath," so they acknowledge it is a real day of each week. The council orders that work be done on the Sabbath. Who would teach this to be pleasing to Yahuah?

You did not know this?

Do you regard the Natsarim as the true Messianic Judaism and do you strictly follow Torah Law?

There is no such thing as "Messianic Judaism." This term was invented to describe those who may be of the tribe of Yahudah, but also practice rabbinical Judaism (based on Talmud as well as Torah, began by a "rabbi" - or exalted one - named Akiba, 2nd century).
The true faith of the followers of Yahusha involves belief in His atonement (by His blood sprinkling our hearts, or inner spirits), and walking in the way He walked; in Torah. We are obliged to go, teach all nations what we were commanded to obey, and that is easily found at Ex. 20, Lev. 11, and Lev. 23. It's not difficult in the least, and in fact a very light "yoke" (teaching). There's only one "rabbi," Yahusha.
BTW, there's no such thing as a "Palestinian" either. That word is based on the term "Philistine," and is a Latinization.

Natsarim are very real however.

So you reject the Oral Law (Talmud) as being transmitted by G-d together with the Written Law (Torah)? That would be similar to Karaite Judaism. Do you then consider the Natsarim the only true Christians, apart from using the term itself?

There is no such thing as an "oral law." As for our similarities with Karaites, the TaNaK is the basis of the revelation of Truth; but unlike them we also embrace the writings of the Brith Chadasha (referred to as the "New Testament" by Christianity). We overcome "strongholds" (mental fortresses of errant beliefs) by the indwelling of the Spirit of Yahusha Who guides us into Truth and discernment.

Thank you for your informative responses. One more question: do you believe in the divinity of Jesus? I assume you don't believe in the Trinity; am I correct?

Yahusha is Yahuah, as He revealed to Philip (Yn 14:9). "Have I been with you so long, and you have not known me Phillip? He who has seen Me, has seen the Father . . ." Sorry, but there's no "trinity" revealed as a teaching in Scripture. It came along much later as a part of the creed developed pertaining to "baptism" (immersion in water, our pledge of a good conscience toward Yahuah, and our commitment/marriage/joining to Him). The "Spirit" is Yahuah, but since Yahuah is the same Person as Yahusha, there is but ONE "person", not three -- unless you can produce a text of Scripture that actually teaches there are three "persons."

We are keen to discern between "exegesis" and "eisegesis."

Our "wineskins" are new, and only accept the teaching authority of Yahusha. "Old wine" (human traditions) will not remain where the "new wine" (Yahusha's Word/teachings) have been accepted.

The Light drives away the darkness, overcoming it completely. If Yahuah were truly 3 persons, He would have surely told us.

BAAL is Hebrew for "LORD," so we don't substitute His Name for "LORD" either.

These are just some details that may be interesting, I'm not intending to upset anyone.

Your account has been locked for the following reason:

This change will be lifted: Never

The site also removed each posting where they conversed with me, and all my responses.

It is now “cleaned” as you will see:

Order the BYNV at: http://www.torahzone.net/  TAKE TIME TO VISIT THE BLOG, YOUR COMMENTS WELCOME

A COMPARISON BETWEEN NATSARIM AND CHRISTIANS: