A QUESTION FROM A SISTER:

Zechariah Sitchin wrote books on Niburu and a 12th planet’s visit every 3,600 years and related stuff. I thought his books were interesting. What say you?

Zechariah Sitchin had much in common with another pseudo-science writer, L. Ron Hubbard. Hubbard turned his science fiction career into a spiritual fiction known today as Scientology.

Edgar Cayce, an American psychic born in my home state of Kentucky, focused more on the popular subject of his day, Spiritualism.

Sitchin's writings were a beautifully crafted mixture of false science and false history, but presented as if they were facts. Everything he reported on was written in a style intended to convince the reader that historical and scientific facts were incorrectly interpreted. His fictional interpretation was much more interesting to readers, and his greatest skill was exploiting the gullibility of the general populace. His readers gobbled-up his imagined concepts of science and history.

Arthur C. Clarke was a brilliant fictional author, and a certain percentage of his audience took some of his ideas beyond science fiction. 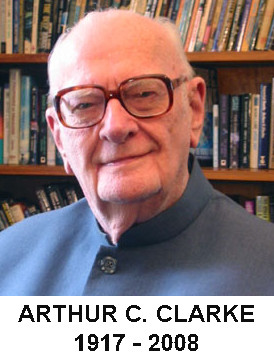 "The first to state his own case seems right, Until another comes and examines him." Proverbs 18:17.

We're not judging these men, only pointing out the way fiction can be presented as facts. It is the responsibility of the reader to test everything they hear, realizing there are many ways to be deceived. The Seven Day Adventists and Jehovah's Witnesses teach their adherents that "Jesus" was Michael the Archangel prior to being born. Parents lie to their children about storks bringing babies, Santa Claus, tooth fairies, and the Easter bunny. The "flat Earth" idea is still widely believed, and 16th century astronomy and the zodiac can be found in the KJV.

Just because something is believed for a very long time doesn't make it true.

Before the KJV, no one had ever heard or seen the name JESUS. (The one Name given under heaven by which we must be delivered is Yahusha. Google it.) The deceivers can't trick us now that the Internet is here. Still, there are those who prefer to believe things that are not true. A person may not believe that lead can be changed into gold, but yet they will believe that bread and wine can change into the body and blood of “JESUS” by an "ordained" man saying “Hoc es corpus meum”.

“The simple believes every word,

“The simple shall inherit folly,