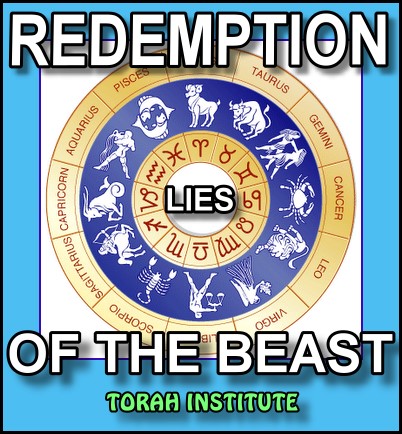 Also known as the "heavenly scroll" or "host of heaven," this astrological sorcery is growing as it is being repeated by Natsarim and Christian teachers. It is being promoted as the "Gospel written in the stars."

The old religion of Babel is occult (hidden) and openly seen in the practice of Astrology. Worshipping (or fearing) the omens of animal shapes thought to be living in the sky, mankind has a long record of idolatry inherited from the astral woman of Revelation 17, Babel. The gangrene has infected the whole world. This woman is also referred to as Mother Nature in the secular media.  False behavior and beliefs have been embraced, even by some modern Natsarim. Some teach that the secret mystery of deliverance has been written in the stars, an idea first published in a 19th century novel MAZZAROTH  written by Francis Rolleston.

The book The Two Babylons by Alexander Hislop was written to counter some of the false claims made in the book Mazzaroth.  The Catholic cardinal John Henry Newman had to respond to Hislop with his own book, An Essay On The Development of Christian Doctrine.  Oddly, the highly educated theologian Ethelbert William Bullinger believed the information in Mazzaroth, and wrote his own book, Witness In The Stars.

Babel's Abominable Rebellion
The Torah (instruction) is not in the sky:
"For this command which I am commanding you today, it is not too hard for you, nor is it far off.
It is not in the shamayim, to say, 'Who shall ascend into the shamayim for us, and bring it to us, and cause us to hear it, so that we do it?'" Dt. 30:11-13 (BYNV)
The ancient source of all sorcery is Babel's worship of the host of heaven (constellations). Babel is the mother of harlots.
The living animals or zoo / zodiac are being explained by many Christian and Natsarim / Hebrew Roots teachers as indicators of the return of Yahusha.
These imaginary dreams are distractions, and we must stand firm on the foundation of Yahuah's Word and not be carried away by the delusions we hear being taught.
Ez. 8 shows how enraged Yahuah was over seeing the animals of the pagans drawn on the walls of His Temple.
Another webpage and a video may help show the problems we can avoid by staying away from Babel's biggest promotion, the fear of the host of heaven:
False teachings from the mother of harlots:
Does Scripture teach us to gain understanding from the star patterns?
http://www.fossilizedcustoms.com/galaxy.html

We have a DVD recording of this video available at torahzone.net entitled SYNCRETISM using Scripture to debunk any notion that the constellations, or many other pagan practices, are in any way acceptable to our Creator, Yahuah.

There is overwhelming evidence that syncretism (especially the zodiac) arouses His most fierce wrath. Stephen confronted the Sanhedrin with their fascination with the host of heaven.  We must be alert to any false teachings concerning the return of Yahusha that are derived from interpretations promoting the signs (constellations) of the heavens. Syncretism is mixture, especially the mixture of differing beliefs. The dragon invented the zodiac, but Yahuah made the stars. (Genesis / Barashith 1:16). No matter who may say so, the secret of deliverance is not found in the stars, but rather it is found in the prophetic Word of Yahuah.

Peter describes the defilements of this deluded kosmic system at 2Pet 2:18-22. The old religion of Babel lures through the enticement of sexual love, and is a scheme of the devil. Compatibility is not due to horoscopes.

There are Christian and Natsarim writers claiming that long before the horoscopes of astrologers, the gospel was written in the constellations. Yahusha's redemption plan is not recorded in stars, but rather in the Scriptures as shadows through the 7 festivals (appointed times):  Pesach, Matsah, Bikkurim, Shabuoth, Yom Teruah, Yom Kafar, and Sukkoth.

Yekezqal (Ezekiel) chapter 8 records that Yahuah's people had forsaken Him by placing these symbols inside His Dwelling Place:  "And I went in and looked and saw all kinds of creeping creatures, abominable beasts, and all the idols of the house of Yisharal, carved all around on the walls." Ez 8:10  Many synagogues put zodiacs in the floor tiles.

The signs of the Zodiac are a living ZOO (Mazzaroth) of imaginary creatures depicted in the heavens by connecting the dots of stars.  Yahuah warned us of this in His Covenant:

"You do not make for yourself a carved image, or any likeness of that which is in the shamayim above, or which is in the arets beneath, or which is in the mayim under the arets, you do not bow down to them nor serve them. For I, Yahuah your Alahim am a jealous Al, visiting the crookedness of the fathers on the children to the 3rd and 4th generations of those who hate Me, but showing kindness to thousands, to those who love Me and guard My commands."

Yahuah created the lights to be for signs and seasons, where signs means signals, not messages within themselves.  The signs signal the seasons, or appointments, directly related to the redemption plan shadowed in the 7 appointed times (moedim).  It is a crafty scheme to shift our attention away from the true shadows of redemption, the 7 annual appointments, and to teach a pattern of redemption using the Mazzaroth of ancient Babel. Yahuah specifically commanded us to not fear the signs of the heavens in the way of the gentiles: