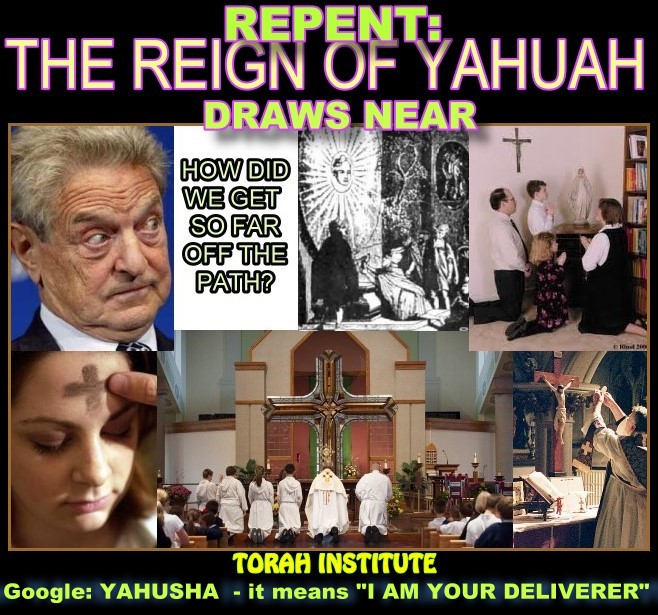 WORSHIP - How Do We Know Who We Worship?

We can know by whether or not we are obeying the instructions of the one we claim to serve.

Our minds are the battlefield of a war in the heavenlies.

Our enemy is not flesh and blood (Ephesians 6:12).

Strongholds are false reasonings and beliefs holding our minds captive to them.

“Do you not know that to whom you present yourselves servants for obedience, you are servants of the one whom you obey, whether of sin to death, or of obedience to righteousness?" (Romans 6:16)

“To the Torah and to the witness! If they do not speak according to this Word, it is because they have no daybreak.” (YashaYahu 8:20)

Discern the words of those you allow to teach you.

Where did Yahuah give us instructions to practice these things:

If Yahuah did not establish them, then who?

Have we replaced Yahuah's Commandments with pagan traditions?

Sacraments - Yahuah never commanded them, hinted at them indirectly, or mentioned any such thing. They add to the Torah, against Dt. 12.

Sun-day - the Day of the Sun. Many other strange festivals were invented, all adaptations from the original rebel Nimrod and his Sun worship.

(The new book SUNDAY ORIGINS is linked below)

Easter Day – Old English, EASTERTIDE; the Pagan festival of the impregnation of Mother Earth by the rays of the springtime sun. Ishtar, Ostara, Astarte, Eostre, Asherah, Eastron, Ashtaroth, and other names were used for this Pagan deity. It became adopted to refer to Yahusha’s day of resurrection. Research the term in any encyclopedia. Easter is the proper name of the Pagan Queen of heaven.

Christmas - The winter solstice festival, commemorated as the Nativity of the Sun, re-thought by Dionysius Exiguus in 525 CE, now promoted as the birthday of the Mashiak of Yisharal. Wreaths (wombs), trees (phalluses), tinsel (semen) & balls (testes) were used to observe the sexual aspects of this Pagan ritual. The tree was an altar where offerings were placed for the deity (Asherah).

The womb wreaths represented Baal, and the phallus trees represented Asherah. This is a practice inherited from the ancient Canaanites, specifically Izebel’s teachings (Rev. 2).

The Roman captain was surprised when Paul asked him a question in Greek (Acts 21:37), so we can be assured a Yahudi speaking Greek was a rarity.

The Name of the Creator is Hebrew, and so is the Name of the Hebrew Mashiak. The crowd became silent when Paul lifted his voice in Hebrew (Acts 21:40).

We see the language of Hebrew is specified at least nine times in the Natsarim Writings (NT). Aramaic is not mentioned once.

I believe Gabrial spoke Hebrew when He told Yusef to give the Child the Name Yahusha, the same language Yahusha spoke to Paul on the road to Damascus (Acts 26:14).

The Natsarim held the memoirs of MatithYahu (Mt.) and the letter to the Hebrews in their original Hebrew script, and this fact is verified by Jerome and Epiphanius (circus fathers at Alexandria).

Jerome, Origen, and Epiphanius considered the Natsarim to be heretics because they did not recognize the teaching authority of the Magisterium, and because they lived according to the Torah, circumcising their male newborns. Many headmasters at the Catechetical school (like Origen) castrated themselves and called themselves "fathers." They did not like the Hebrew roots.

The Mashiak of Yisharal observed none of the practices above, they are more about Nimrod than anything else.

"We know that we have come to know Him if we obey His Commands.

The man who says, ‘I know him,’ but does not do what He commands is a liar, and the Truth is not in him. But if anyone obeys His Word, Alahim's love is truly made complete in him. This is how we know we are in Him: Whoever claims to live in Him must walk as Yahusha did."

"For you were once darkness, but now you are LIGHT in the Master.

Live as children of LIGHT for the fruit of the light consists in all goodness, righteousness and truth and find out what pleases Yahuah. Have nothing to do with the fruitless deeds of darkness, but rather expose them." Eph 5:8-12

The problem facing organized faith groups is their teaching authority.

They do not use the authority of the Word of Yahuah, evidenced by the fact they do not obey anything His Word directs them to do.

They do everything He said not to do, and nothing He told us to do.

Christians are servants of the one they obey (worship), and they certainly are not obeying Yahuah. They are taught to avoid any kind of “Judaizing.”

The Ten Commandments are shunned.

Question: Who would teach such things?

Yahuah is not Baal (the LORD). (Google also "Yahusha")

Sunday is not our day of rest. The world was led astray in 321 by Constantine (and endorsed in 365 at the Council of Laodicea).

Christmas is the old rebirth of the Sun deity, overlaid with events plucked from Scripture that occurred over a 2-year period. The Magi visit was 2 years after Yahusha was born in Bethlehem.

Easter is the Great Harlot, Ishtar - and they have no Passover.

Sun worship became veiled in Christianity during the 4th century, and has gone undetected until here in the last days. Come out of her My people (Circe, circus, Kirke), lest you share in her sins, and lest you receive of her plagues." (Rev. 18:4)

OBEYING HIM IS PROOF THAT WE KNOW HIM

By ignoring Torah, we choose death.

If we don’t obey His Commands, we don’t know Him.

But whoever guards His Word, truly the love of Alahim has been perfected in him. By this we know that we are in Him. The one who says he stays in Him ought himself also to walk, even as He walked.”

OBEDIENCE PERFECTS BELIEF, BUT MEN’S TEACHINGS ARE LEAVEN, CORRUPTING THE HEARTS (WINESKINS) OF THE DECEIVED.

Hebrews 11 shows us it is impossible to please Yahuah

Our amunah is perfected by obedience. Hebrews 11 gives

many examples of how those having amunah acted on their

belief in Yahuah by obeying Him. Note Revelation 12.

The first-fruits are those who obey the Commandments, and hold to the testimony of Yahusha.

There are many false teachers and deceiving spirits in the world.

If you abide in His Word, you are truly His, and you will know the Truth, and be set free from men, and the reign of the beast. (BABEL)