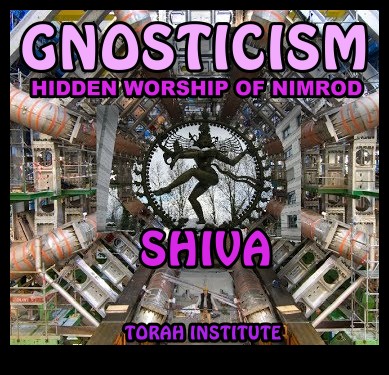 Gnosticism - You See It Everywhere The author of The Adventures of Sherlock Holmes (1892), Arthur Conan Doyle, was a champion of the Spiritualism movement in the late 1800's.

One of his famous quotes is:  "You see, but you do not observe." 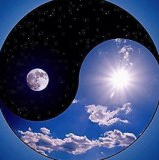 Gnosticism invaded the Levant [eastern Mediterranean area] from the east (India) around the 2nd century BCE, and continues to spread it’s errors all around the world.

All false teaching authorities began at Babel, however they became very strong in the Hindu culture in the east. Many of the practices and symbols of Catholicism come from the Hindu / Buddhist culture.

Yahukanon had to address some of the “mystical” nonsense because the Natsarim were falling for some of the false ideas spreading from the east.

The teachings from the east were founded on Hinduism's mysticism, and the false idea that everything physical was intrinsically evil, and everything invisible was good. 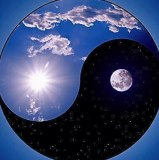 Yahusha came in the flesh, but some began to teach He was an apparition (phantasm). In their minds, a perfect, ascended being could not be fleshly.

The blue skin of the Hindu deities represented their ascended state, the color of the sky. 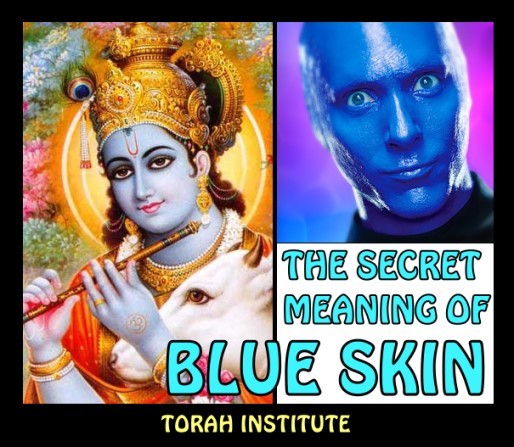 Gnostic roots are Hindu and Buddhist, and these ideas affected the Kabbalah of Rabbinic Yahudaism and Catholicism’s halos, beads, holy water, collars, stoles, crescents, monks, nuns, the tabernacle / gohonzon on the indoor altar, incense, candles, relics, prayers and offerings for the dead (necromancy), and much more witchcraft.

Their concepts infected the whole Levant, and Yahudaism was also affected. The Gurus became the rabbis. Enlightenment became the teachings of Kabbalah.

Pre-Nicene "fathers" and Post-Nicene "fathers" brought more of this into their bosom than we can even imagine. The asceticism, holy water (Ganges nonsense), ashes on foreheads, candles & incense practices, processions, circumambulaton, the collars, skullcaps, stoles (like the ones the Dali Lama gives to people), the nuns, monks (lama means monk), and more . . . are all just some of the physical evidence of the Gnosticism from the east. The Jagannatha (Juggernaut) temple car is reflected in carrying the pope around; The indoor "tabernacle" every Catholic sees on the altar comes directly from the Buddhists' Gohonzon.

If the "fathers" during the first 100-200 years were so shrewd, how did they ever manage to be called "fathers" at all. Yahusha ordered us to not be called father, rabbi, or nasim (leaders), for we have but one Who is our sole authority: Yahusha Himself.

Nicolaitanes have been around since the first century, and are still here. The context of the Nicolaitanes may look different, but they crank them out from every seminary, and their heads are filled with the writings of the circus fathers. Anyone under the spell of twisted teachings is not aware of it. What seems straight is witchcraft; and when the Truth is spoken the spell is broken. Christians go to Sunday circus to have the meaning of the Scriptures explained to them.

Catholics go to their Sunday circus to receive "grace" dispensed through sacraments, and support the authoritarian organism that has them under its spell. Natsarim ignore the circus fathers entirely - whenever they taught. They are the Alexandrian Cult; the Natsarim were originally at Antioch. Yahusha explains the Scriptures to us. Here's a photo of the Didascalia (teaching authority), aka the Catechetical School at Alexandria.

The teachings of men blocked the identity of our Creator by substituting His Name. Read the preface of any NIV, and you'll see they admit removing it and inserting the device LORD.

LORD is the definition of the Hebrew word “BAAL.” 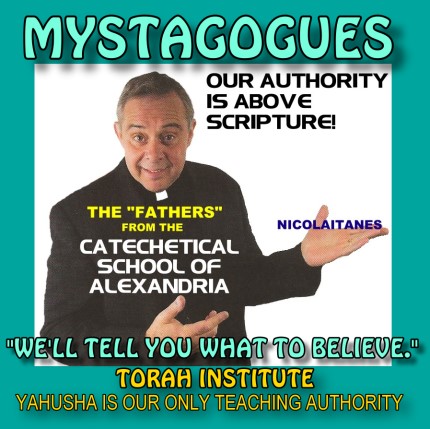 The Alexandrian “fathers” were mystagogues who initiated pupils into the “mysteries of the faith”. As I was taught by the Jesuits, they would often use the phrase, “mysteries of the faith.” The laity [common folk] was keep in the dark, and told what to believe. They had to blindly trust in the clergy’s teaching authority.

These teachers withheld the Name until an initiate progressed to higher grades, and even then provided a false one. In 2008, they prohibited uttering praise to Yahuah, ordering a substitution for His Name, such as LORD or DOMINI (Latin).

In the east, the Name Yahusha was concealed as the cryptogram IC-XC.

In the west, the Name Yahusha was encoded as IES, IHS, and the Latinized form from these, IESV.

The IESV code/theonym in their Latin Vulgate evolved into the JESU/JESUS term taken into the KJV and later translations.

The authentic Name of our Redeemer is YAHUSHA, the first part of which contains the YAHU component (I was/I am/I will be) as expressed in names such as NatanYahu, ObadYah, NekemYah, YashaYahu, YirmeYahu, etc.

YAHUAH became flesh, taking the Name YAHUSHA, since the ending SHA conveys the meaning of "deliverance" - from the root YASHA, meaning to deliver.

As our Healer Yahuah is called YAHUAH RAFA; as our banner He is YAHUAH NISSI, and so on with all His roles.

The teaching authorities over us have taught us Yahuah is a committee of three "persons" in one "GOD" - but Yahuah is only one, and we call on Him as our Deliver, Yahusha. To believe in “one god in three persons” is the Catholic faith (See Athanasian Creed).

Greek, Latin, or Korean languages don't alter His identity or His Name.

For many decades, the New Age movement has been growing slowly behind the scenes, spreading its tentacles into the minds of educational institutions, and even Christian assemblies through YOGA classes posing as exercise and/or meditation.  The ideas and wisdom behind it is not new at all, but very ancient  -  the origin is Babel.

Because Truth became mixed with the poisoned teachings of the old religion of Babel, we must separate Truth from whatever so-called hidden secrets some want to share with us.  We see people teaching the Gospel using the Mazzaroth, the very origin of all sorcery!

Secret knowledge is not in the pattern of the stars, or lines in our hands, joints in our skulls, or our horoscope for the day.

EBIONITE NATSARIM ARE ON THE RISE

Good and evil were divided into “spiritual” and “physical” by Gnostic groups of the past, one was even made up of Natsarim.  Just because a group that followed the teachings of Yahusha existed, such as the Ebionites (also referred to as Natsarim), it does not follow logically that every detail they believed was Truth.  In the very late 1st century and onward, every sect of Torah-observance was being confronted with ideas from the far east.

This ancient knowledge coming from the east was derived from the mythology of Babel, wrapped up in the Mazzaroth (Zodiac) and ancestor worship.  Today, we might call it the “New Age,” promoting symbols and ideas from Buddhism/Hinduism.

The Greek language of the period referred to this mythology as “Gnosticism” (reason, knowledge), and Paul and Yahuchanon addressed this ascetic discipline in their letters.  This knowledge was thought to be a highly-prized secret.  Gnosis, or knowledge was considered critical to one’s ability to ascend to a higher level, and the principle of this is reflected in the widely recognized symbol, the Yin Yang (light being good, dark being evil).  This symbol depicts the Hindu doctrine of Samsara, or “wheel of life”. The light side abstractly stands for everything “spiritual”, or the non-physical realm of consciousness thought to be “good”.  The dark side abstractly reflects everything “physical”, the “evil” to be delivered from.  This is why there was the discussion about “the elementary matters of the world” being used as a means of deception by Paul (Col 2:21-23). Yahuchanon writes about those teaching that Yahusha had not come “in the flesh” (1Yn 4, 2Yn 1).

GNOSTICISM ON THE RISE

The Ebionite Natsarim embraced the idea that that it would have been inappropriate for Yahusha to really have been “in the flesh” since all flesh was considered corrupt in the Gnostic view.  Some believed Yahusha was an ephemera, a non-physical phantasm manifestation.

The Gnostics believed that only through death could one pass into perfection, which derives from Hindu teaching.  Gnosticism was the term describing the mixing of Hinduism into the multiple “Christianities” that were blossoming during the 2nd and 3rd centuries, expressed in the Greek terminology of the time.

Beware, the Ebionite Natsarim are once again on the rise.
Yahusha definitely came in the flesh, born of a virgin, through the overshadowing of the Ruach ha’Qodesh.  To say otherwise is heresy.

Natsarim are here now, to straighten many wrinkles in Yahusha’s bride before He comes.
Solar references like cross/crux are corrupting influences to the faith, even though one may believe that using pagan devices and patterns to teach the illiterate masses helps in some way. Romans, Hindus, Egyptians, Babylonians, Celts, and dozens of other ancient cultures used the magic symbol of the sun, and it was just another detail adopted into Christianity, along with trinities, steeples, bells, statues, holy water, trees/wreaths, haloes, transubstantiation, Sun-day, etc.,.
Here are a few examples of the use of the crux symbol: 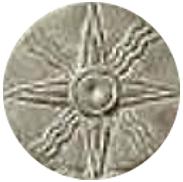 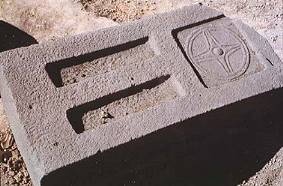 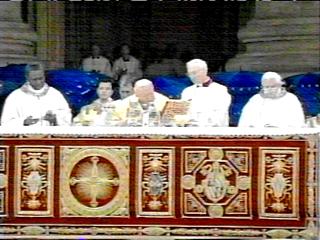 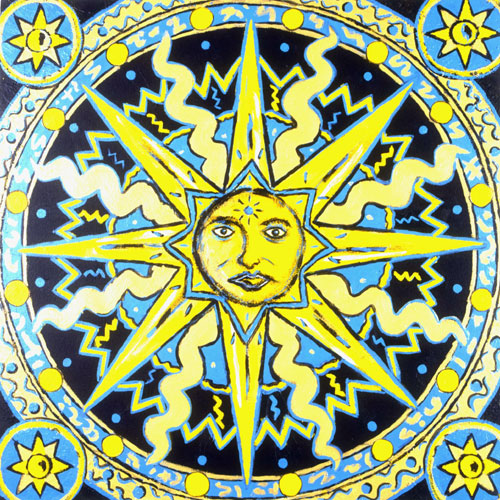 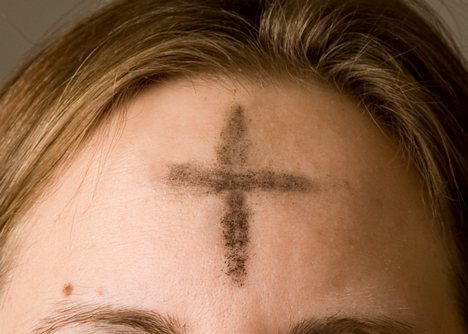 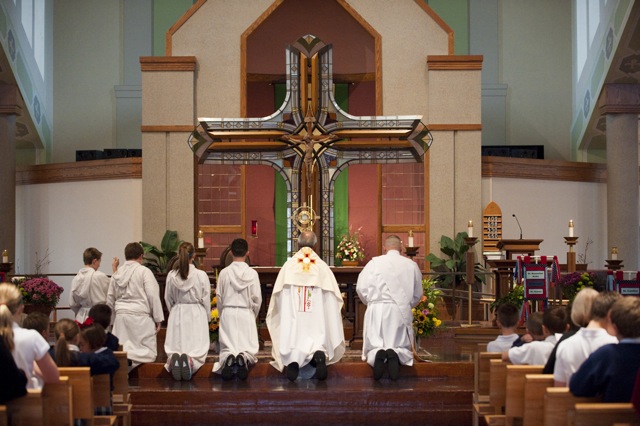 Worship of Crux, wafer idol
Always stay alert to not fall down before any blocks of wood, no matter how they spin it for you . . . they build it, bake it, then bow down to it.

Crux ansata, aka Cross of Life, symbol adapted as a pallium worn by pagan priests. Roman Catholic costumes use this pattern in their designs.
It represents the act of sexual union.
Pagan worship is all about fertility. The highest ritual of Hinduism is known as shivaling, pouring milk over two objects representing the male and female genitalia.
(see more at www.fossilizedcustoms.com/allah.html) 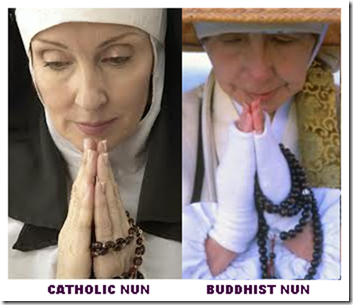 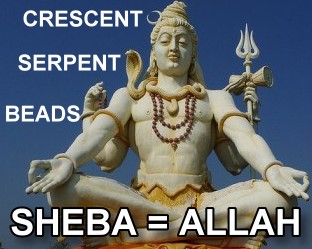 Namaste gesture, a sign that "the spirit in me bows to the spirit in you." Catholicism and Islam received the prayer beads from the Hindus. They originated as the "tears of Shiva" around 800 BCE. 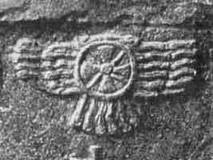 Zoroastrian crux
Join with us and forsake the guile of the Catholic Circus.  We accept those who are weak, and gently guide them along in the love training of Yahusha.
We are the sect of first-followers of Yahusha,
His treasured possession (Mal. 3), defenders of His Word and His Name.  Become one of us.
The Truth, in love, is our hallmark.
www.fossilizedcustoms.com